A recently launched Arapahoe County program aimed at keeping people housed is operating in the county that had Colorado's highest eviction rate last year, according to state court data.

When Girma Tsegay fled his worn-torn home of Ethiopia for Colorado with his three children last year, the first thing he needed was a place to stay.

He landed on an apartment in Aurora and — though the sounds of the loud highway outside gave a visceral reminder of the war back home — it was safe.

“They made me sign a lot of papers, I didn’t know all the details but the only thing I wanted is a house to live with my kids," Tsegay said.

Tsegay said he was always timely with his monthly rent, which is about $2,500, until late May when he became sick with COVID-19. Tsegay said he told his landlord he would be a few days late getting her a check. He said he received assurance from her that it would be fine.

But when he tried to pay his following month's rent at the end of June, his landlord wouldn't accept it. He was late last month, he remembers being told, and now was being served with an eviction notice. Last month's late rent had already gone toward paying the landlord's legal fees, Tsegay was told.

Tsegay turned to a recently launched Arapahoe County program aimed at keeping people housed in a county that had Colorado's highest eviction rate last year, according to state court data, with over 9,000 evictions.

The eviction clinic, which began in May, is located on the third floor of the county building at 1690 W. Littleton Blvd. and is open Tuesdays, Thursdays and Fridays between 8 and 11 a.m.

A partnership with Colorado Legal Services — a statewide nonprofit providing civil legal services to low-income residents — the clinic, which offers free legal aid, is funded through a slice of the American Rescue Plan Act, or ARPA, a $1.9 trillion federal COVID-aid law.

Currently, there are just two clinic staff members, a paralegal and a lawyer — Megan O'Byrne, who is a supervising attorney at Colorado Legal Services.

With high demand and thin staff, O'Byrne said the clinic is only able to see about nine people per week.

“We often have to turn people away, unfortunately, so we are working on getting additional staff," said O'Byrne, who is hoping the clinic will eventually see two lawyers, a paralegal and even a social worker to help clients navigate the emotional toll of eviction.

“I don’t think people think about eviction very often in terms of what actually happens," O'Byrne said. "The trauma of having all of your belongings, everything you own scattered on the street, and being locked out of your home.”

The legal process that comes with an eviction can be intimidating, said O'Byrne, and often tenants cannot succeed in staying housed without legal help. 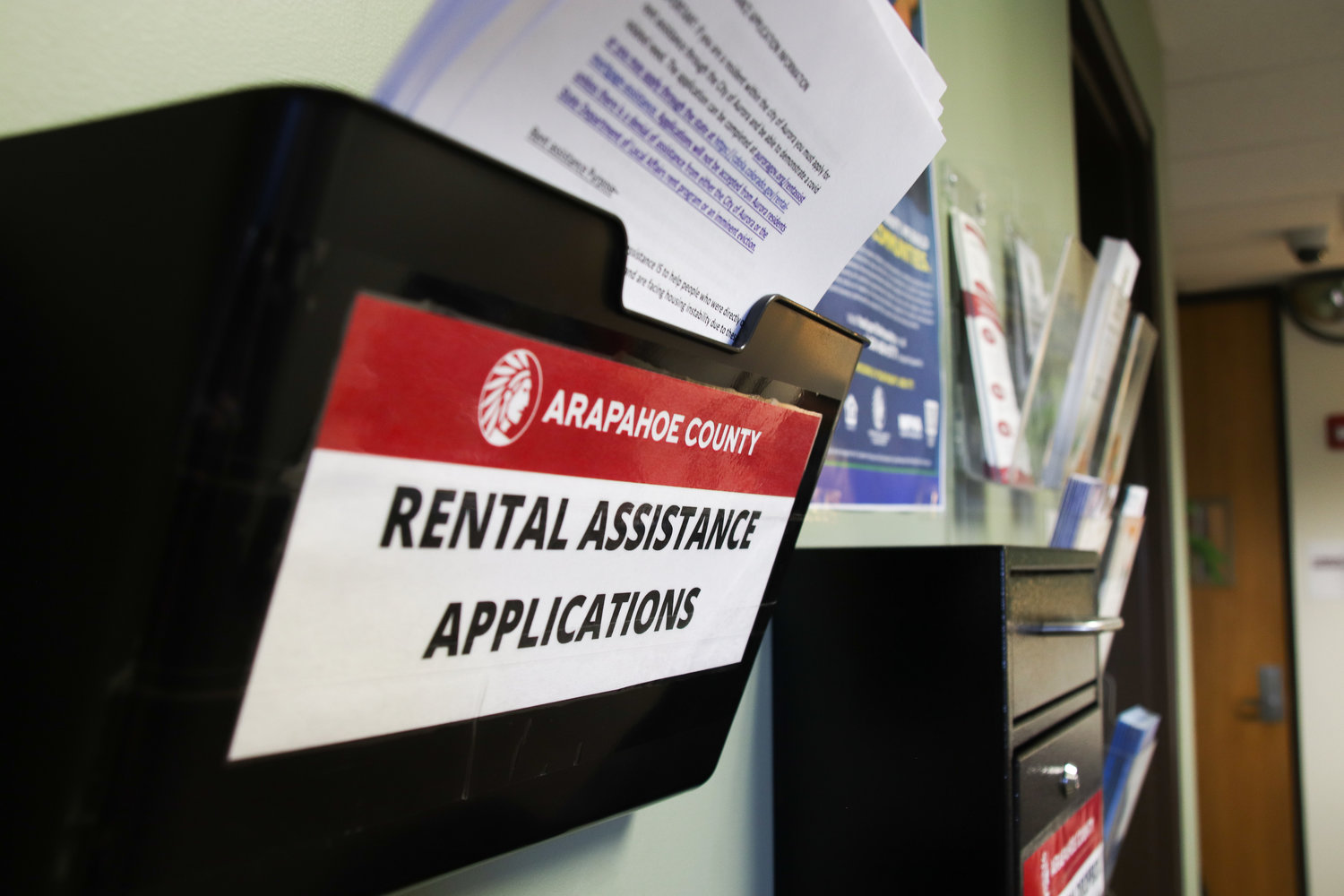 The eviction clinic, located on the third floor of the county building at 1690 W. Littleton Boulevard, is open Tuesdays, Thursdays and Fridays between 8 and 11 a.m. Photo by Robert Tann

According to Jon Asher, Colorado Legal Service's executive director, over 90% of landlords are represented by a lawyer while less than 5% of tenants are.

O'Byrne said in recent years the scales have begun to tip — albeit very slightly — as more attorneys representing tenants pop up around the metro area.

"There are more tenant attorneys in Colorado than when I started even three years ago," O'Byrne said. "But we still are limited in what we can do."

An eviction process usually takes between two to three weeks before a tenant could be forced out of their home, giving O'Byrne a small and crucial window of time to act.

In most cases, O'Byrne sees a tenant threatened with eviction because of trouble paying rent on time. Colorado law requires landlords demanding rent give 10 days to accept payment before issuing an eviction lawsuit. In some cases tenants can have up to 30 days, though that is less common, O'Byrne said.

If that time passes without the tenant being able to make the payment, the lawsuit will be served — the stage in which the clinic steps in to help.

Clinic staff usually begin by providing tenants with their response, called an "answer," to the lawsuit. O'Byrne said this is a critical step as responses need solid legal grounds to protect a tenant and trigger an eviction trial.

Some tenants will try to craft answers on their own and may say they are working to get the rent money, but that itself is not enough in most cases, O'Byrne said.

“It seems in a fair and just world that would be enough ... but unfortunately, that’s not a legal defense,” she said.

If the clinic is successful in how tenants respond to the lawsuit, tenants will go to a trial, usually scheduled seven days after the response is given.

During that time, the clinic works with the Colorado Stability Fund — which provides rent assistance — to get the needed money to the landlord, which usually will see a trial dismissed.

This was the case for Tsegay, who was able to have enough rent assistance money to dismiss the eviction lawsuit. He said he remembers receiving his eviction notice as one of the "darkest, darkest days in my life."

In the event money cannot be provided, the clinic can use the trial to secure tenants additional time to find new homes as well as keep evictions off their records, which can serve as a major barrier to future housing.

The clinic's services come as the high prices of food, gasoline and other essentials eat away at paychecks and eviction rates are on the rise nationally as pandemic rental aid begins to run out.

While county commissioners have approved funding for the clinic for three years — to the tune of $1.5 million in ARPA funds — clinic staff and county leaders hope it can continue for longer.

They're optimistic the program will be a success, citing a similar service in Adams County that represented 695 people across 363 households, 85% of which were able to stay housed by gaining more time to move elsewhere or by obtaining a housing voucher.

"My hope and my hunch is this pilot will prove its worth and we'll be able to continue the program," said Arapahoe County Commissioner Nancy Jackson.

But as the clinic looks to secure more staff, it will take more than just a small room of lawyers to meet the needs of those facing housing issues in the county, O'Byrne said.

With the breakneck nature of an eviction lawsuit, which can barely span a pay period, O'Byrne said landlords should work with their tenants before pursuing such an option.

“I think the landlords could be more patient in filing the case," she said, adding that nearly all her clients with eviction cases have applied for rental assistance. "They are trying to get money to the landlord.”

The economic downturn from the COVID-19 pandemic, rising rent prices and a lack of affordable housing have created compounding crises for low-income tenants, O'Byrne said.

“People are just still trying to get on their feet after this worldwide catastrophe," O'Byrne said. “Until we decide as a society that housing is a human right and everyone’s entitled to a home, we’re not going anywhere," she said.

Acosta, Brighton police commander, dies
Former Brighton Police Department Cmdr. Frank Acosta passed away of natural causes, the city announced Sept. 23. Acosta joined the police department in February 2000. Before that, he was a state …
Classes continue at Fort Lupton HS despite circulated threats
The Weld Re-8 School District became the latest in a series of school districts to face rumored threats to school safety.   In a district website post Sept. 23, Weld Re-8 Superintendent …

Shared electric scooters continue spread in Denver suburbs, but safety a concern
In the beginning, the scooters arrived without permission. Now, the electric devices are continuing to spread to more metro-area cities, touted as a way to reduce traffic but also feared by some …
State introduces the new Office of Civil and Forensic Mental Health
The Colorado Department of Human Services (CDHS) announced that the Office of Civil and Forensic Mental Health (OCFMH) is the new name for the former Office of Behavioral Health (OBH).